Skip to content
Yellow!!! I watched BG yesternight and it’s so funny, fluffy and light. It’s Taiwanese movie, so I wasn’t taken aback that much.

Take a peek at the trailer —>http://www.youtube.com/watch?v=XcwUmsa1FYo

Synopsis —
In the movie, Ella plays A-Dan, a high school girl, together with Da Yuan’s role as Pei Pei and Fang Zhi You’s role as Xiao Mi; the trio formed a group known as “Huai Nu Hai aka Bad Girls” to undertake chivalrous acts and stand up against bullies. The storyline has it that the trio’s school was used as a filming site, and one day A-Dan (Ella) accidentally chanced upon the filming and by a twist of fate, ended up as the female lead of the film. With the opportunity, she also got to discover a side to the popular idol, Justin (played by Mike He), which others do not know. Hence the 2 very mismatched individuals embarked on a journey to develop a story of their own, beyond that of the “film”.
(Credits — MyDramaList) 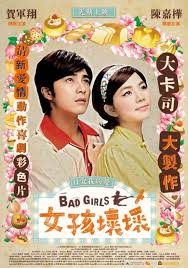 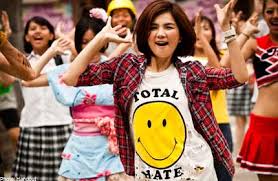 I know that just by looking at the cast for this movie, some people will be eager to watch it, like I was. I’m a fan of Ella Chen and I’ve heard of how good an actor Mike He is, but this is the first time I’m going to be seeing him act. I really like Ella Chen’s hair here, it was a neck length, there was a hint of red and it was so full!!! Both  of them really did a good job in here.

BG is a very light, cute and quick movie. Although it’s included under the genre action, lol but that’s no action. The action scenes has so much special effect to it and I found it really funny, because I haven’t watched such a movie in a long time. How can you punch someone and the person flies into the space and lands on the moon?? lol, that’s what the action scenes are like (not every action scene)

Ella Chen plays the role of a tomboy, she has a bubbly and cheerful character and of course she knows nothing about love. While Mike He plays the role of an idol, who is also an actor and quite lonely. Hence, we can guess most of the scenes. The romance scenes were cute, but predictable. There’s also the baking concept, which I found interesting. 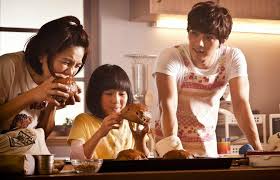 Actually, BG cracked up a lot…… it’s so much fun to watch hahahaha. I think they over-did the special effects. If you are interested in a movie to pass time with, or something really cute and fluffy, then this is for you :).

Oh…. I almost forgot about this…. I never knew that there were edible flowers and they could also be used as ingredients to bake. The main soundtrack is upbeat and really nice.