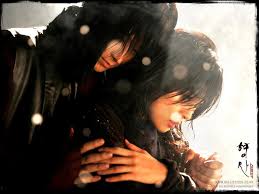 Review—-
For those who had a big reaction while reading the name of the cast high five!!!! Ha Ji Won and Kang Dong Won are really great actors!!! I’m going to be sincere, this movie is a little hard to review, I’m going to quote what I read from somewhere ”This is a movie to watch and enjoy, it’s not a movie to understand” LOL I know it sounds crazy, but that’s what Duelist is.

Ha Ji Won’s role is that of a rookie detective….. and before I go any further, I did like to say that this is my first historical korean movie ever….. Back to the story, she’s really hot-tempered, her hands act faster than her mouth – she would rather beat someone to a pulp to get an answer, than rather talk the person into saying it. Not much is known about Kang Dong Won’s role, apart from the fact he was a well-skilled assassin and he’s highly, really highly reserved. Then we have the other cast, playing different roles, either to support or oppose the two main leads. We are in a corrupt world, which is no news. Ha Ji Won and a superior officer are asked to catch and stop those doing all these corrupt stuffs in this movie and that’s how the two main leads meet. Then both of them are torn between performing their duties.

This movie is a romance movie…… I know you#re wondering why the emphasis, but just in case you watch it and you’re wondering what the heck I’m I watching. It’s a romance movie, it’s not just the type of romance movie you and I are accustomed to. I actually found it hard to understand the movie itself, but I kept on watching until the very end and after some few minutes BINGO !!! I got the idea.

The fight scenes between the two main leads here are AWESOME!!!! Simply awesome. It was well choreographied; it was like they were floating,fighting and at the same time dancing. For a better understanding, try imagining two people dancing tango, but instead of the music, insert swords clashing and a historical setting…… You simply need to watch the movie. I really don’t want to spoil this movie for those who want to watch it. Somewhere towards the end there’s this scene, where the two main leads are supposedly fighting…… This scene lasted for almost 6 mins or even more (okay or less). It was just the two of them, it was AWESOME, BEAUTIFUL and MAGICAL!!!!! I think I did say they were making love under a full moon…. LOL I know this sounds crazy, but that’s what was happening. In this scene, she wants to catch him (arrest him) and he wants to kill her, but they are so much in love that it isn’t working that way at all for them……… I did love to say more…. 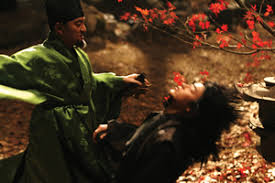 This is a good movie!!!! The cinematography, acting, fight scenes and down to the editing…… everything is cool with this movie.