Skip to content
I can finally review this….. Seriously, does anybody know the cure for procrastination?? I really need it. I know I should have posted this years ago…. I hope no one is holding any grudge against me!!!!! The first time I watched Mujhse Dosti Karoge, it was without English subtitles…. One, I don’t speak Hindi, but nevertheless I was glued to my seat and my eyes were locked on the screen. Ever since, I’ve re-watched it countless of times, because the whole movie is so intense and I wanted to understand properly what the heck was exactly going on. Nevertheless a site put an end to my misery!!!!

Trailer!!
Details
Director — Kunal Kohli
Producers — Yash Chopra
Aditya Chopra
Written — Aditya Chopra
Kunal Kohli
Starring – Hrithik Roshan
Rani Mukerji
Kareena Kapoor
Music — Rahul Sharma
Cinematography — Ravi K. Chandran
Distributor — Yash Raj Films Pvt. Ltd
Release date(s) — 9 August 2002
Running time — 149 min.
Language — Hindi
Cast —
Hrithik Roshan — Raj Khanna
Rani Mukerji — Pooja Sahani
Kareena Kapoor — Tina Kapoor
Satish Shah — Mr. Sahani
Himani Shivpuri — Mrs. Sahani
Kiran Kumar — Mr. Khanna
Smita Jaykar — Mrs. Khanna
Sachin Khedekar — Mr. Kapoor
Uday Chopra — Rohan Verma (Special appearance)
Parikshat Sahni — Mr. Verma
Maya Alagh — Mrs. Verma
Namuna Nembang — Piya Kapoor
Synopsis
Raj Khanna (Hrithik Roshan), Pooja Sahani (Rani Mukerjee) and Tina Kapoor (Kareena Kapoor) are childhood friends. While Raj has always been attracted to the vivacious Tina, he is completely unaware of the quiet Pooja’s love for him.
Raj’s father (Kiran Kumar) decides to move to England with his family to take up a new job, so Raj has to go away from his friends. He makes Tina promise to write to him via e-mail. But Tina soon becomes occupied with other things, so it’s the loyal Pooja who writes to Raj; but she always signs with Tina’s name to help Tina keep her promise. Raj and Pooja have many things in common, and their e-mails bring them very close to each other. A decade and a half later, Raj returns to India for a short vacation. By now, he’s in love with the girl he has been writing to, and believes he can recognise her at first sight.
When the three of them finally meet, Raj, to Pooja’s disappointment, completely ignores her and is besotted with Tina, who is as vivacious as ever. However, during the two weeks of his vacation, he cannot help but notice that the real Tina is completely different compared to the person he has been exchanging mails with. Will he ever know who it really was?? If he does, how will the whole issue be resolved?? 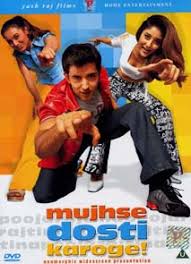 Review—
Those details above have a way of making someone tired…. Hmmm, according to my short history with MDK above, I’m a huge fan of this movie. I don’t know if I’ve written this (I know I can scroll up, but I’m pretty lazy atm), MDK is a Bollywood movie.

The storyline is the case of mistaken identity, the person in whom Raj falls in love isn’t the same person he thinks it is. The only difference, is probably, the three of them have known each forever. The whole movie revolves round the love triangle between Raj and Pooja, Tina and Raj.

Raj is someone that is ready to give his all for the person he loves, but underlying his happy and bubbly attitude, he can also be cruel. Pooja is the loyal and quiet one, while Tina is outgoing and sometimes wants to believe the world revolves around her.

Why do I like MDK so much??
Roshan is such a wonderful actor, he’s got the looks and the skills (fangirl hormone kicks in)….. His acting was just too good, how he talked, those glares, stares, singing, dancing and all. His glares where so INTENSE. Tina and Pooja didn’t fall short either. Apart from their acting, the soundtracks where really catchy and you really want to dance along (I actually dance along, anytime I play the soundtracks hehehe). The whole packaging of the movie is also so good, you wouldn’t even notice, that you’ve been sitting in front of your screen for more than 2 hours…. It’s really that interesting.

What I didn’t understand is the giving-up-your-love-for-friendship theme they went for…… Don’t get me  wrong, that theme is good. I’m just thinking that could have simplified the whole situation (Well, if they had, I doubt if MDK would be this interesting). Mujhse Dosti Karoge also reminded of this saying ”You can’t reap, where you haven’t sown”.

I urge you all to give this a short, I’m absolutely sure you will find yourself watching snippets of it everynow and then. You can watch it here. The earlier the better, Bollywood movies online seems to have problems with copyright infringement SMH….

Here’s my favourite soundtrack  in MDK, it’s actually a medley.