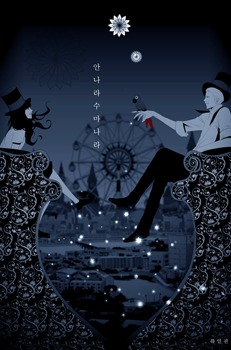 When I first started reading Annarasumanara by Ha Il Kwon I was wondering how the story will play out; there’s a supposedly good looking guy, admired by everyone in class, but he was drawn somewhat ugly; a bright female student but drowns in her father’s debts and a ‘real’ magician is thrown into the mix. I totally had no idea what to expect.

Some couple of chapters into Annarasumanara I was sold. The handsome-but-ugly-drawn male student was indeed good looking. Instead of the illustrator portraying his beauty, he depicted his character and his stance in life instead. It took a while for me to get use to his handsome features lol!!

That aside, this webtoon makes you ponder; how does one characterize an adult? Is there a particular way of an adult? What kind of adult are you? What is it like to be an adult? Is it age dependent? Anyway so many questions flashes through your mind, well at least it did for me. Apart from the adult thingy, another issue was tackled -magic (dreams, aspirations). What’s your magic? When you find it, do you plan on being a magician? Or will the harshness of reality keep you away from it?

This comic is highly recommended to both parents and kids. Of course most parents want to best for their kids, but at the same time they need to stop to check if they aren’t pressurizing their kids, hence neglecting their kids’ dreams.

I like the last chapter, the author didn’t sum up a particular kind of adult instead we see that each characters are trying their best to do what they like, while still facing reality. No ditching reality for magic (dreams, aspirations etc) and vice versa.