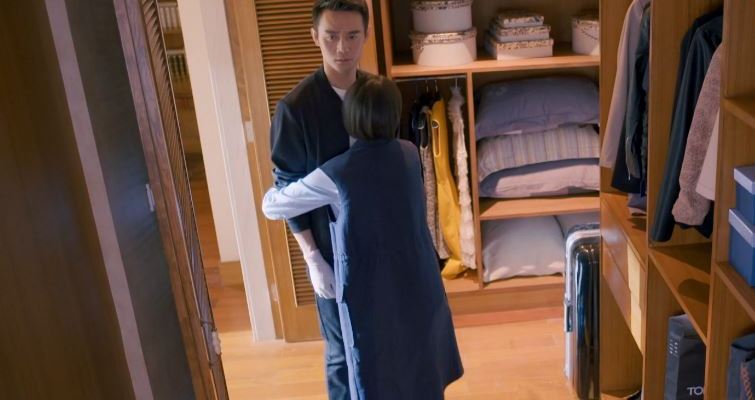 I’m giving this a shot, let’s see how it goes. If I can keep up with it, then there will be more. If not, then not….Life made easy.

3 eps air per week on Mondays. So far so good, I’ve been looking forward to Mondays XDD. Well Eng subs aren’t available till Tuesdays or Wednesdays. This week’s recap/review is on eps 7-9.

With the way ep 6 ended, it wasn’t a surprise to see the corpse of Ye Zixi. I kinda felt bad for Ji Bai, I was expecting him to throw some punches at least two but nope, I have to applaud how he restrained himself with ‘external forces’ – First was venting his frustrations by playing basketball, next was eating a spicy meal (which he kinda made everyone eat lol), and lastly, smoking. Well you can tell how serious and difficult it was getting for him to exercise self-control and keep playing his role as a detective.

During the course of investigation, it felt as if there were no leads, since there weren’t any fingerprints on the blades used. But of course that’s when Xuxu comes in and some other experts, and it didn’t take long to nab a suspect. Zhang Shiyong!! I hate that guy, he’s such a douchebag! He finally ‘fesses up that he was having an affair with Ye Zixi. OMG, the look on Ji Bai’s face when the camera kept panning to him wasn’t nice at all. If he could kill ZSY, I bet he would have done so on the spot. However, ZSY insists he wasn’t the murderer, but he was the one who covered her (Ye Zixi) up because he didn’t want to see her like that. Well as viewer, it looked as if he was telling the truth, Xuxu also had the same thought. Just when I thought the sh*t couldn’t get any more real, Ye Qiao was summoned for a ‘talk’ at the station. Then she went on and on, on how YZX stole everything that supposedly belonged to her, even Ji Bai! I totally didn’t see that coming. Of course it was obvious YQ had and still holds some deep-rooted hatred towards. She went on to say how she fell in love with Ji Bai first, but she couldn’t pluck the courage to talk to him, plus Ji Bai wasn’t interested in any of those attentions sent his way. But YZX came back and she was buddies with Ji Bai just like that. BTW Xuxu was also seated in the investigation room when YQ was saying all of this. She kept throwing glances at Ji Bai lol!! Well, she tells them how she killed YZX, called both ZSY and Ji Bai, and also the approximate location where she discarded YZX’s phone.

That concluded the investigation, but I felt something was off. Of course all the puzzles seem to fit seamlessly in place, but it was too quick and kinda easy (<— that’s my opinion). Some pictures, divorce papers, and some company documents were found in YQ’s possession. Xuxu was looking through them and her reaction confirmed my suspicion that what they just unraveled was probably the tip of the iceberg and there’s more to come. Xuxu decided to take another trip all alone to YZX’s villa, the crime scene. Yao Meng also felt something was off, she recalled her conversation with YQ about a necklace that held the picture of YQ’s mum (I actually have no idea how YM knew something was off with that though). Anyway, by the end of ep 9, it was pretty obvious that there are more people involved in YZX’s death. It’s also obvious that they are trying to protect someone. Who that person is, there might be a hint or 2 in this week’s episodes. Also, there’s no way YZX would have opened the door for YQ, so there’s a possibility that YQ and ZSY either came together or they came at different times, but were in the villa when the incident took place.

A peek into the reaction of YZX’s family members – uncles, aunts, cousins….. There was no form of shock registered on their faces, it was like they already anticipated it will happen. They were more bothered about how the news of her death and money laundering will affect their stocks. It was even worse when YQ’s immediate family was having a remembrance for YZX and her dad. YQ claim her dad liked and still likes YZX more than his own daughter (her), then YQ’s bro (I’m not sure he’s her bro though, I’m not certain about his position in the family) says, even in death YZX still has the ability to tear their family apart. The evening ended with them smashing stuffs, bitterness, and anger; just horrible. I’m really want to know why there’s so much hatred.

OTP Moments – Saved the best for the last hehehe!!

Xuxu tried her best to console Ji Bai during the investigation. On the crime scene, she suddenly hugs Ji Bai *grins* and even pats him on the back. She then suggested that she would analyse the scene, but then Ji Bai asked her if she had ever investigated a crime scene and she replied in negative lol!! He just picked her up with one hand by the collar and moved her away lol!! They also shared an indirect kiss hehehe!! He drank out of her bottle, that was after he ‘stole’ her food hahaha! The best moment was when Xuxu suggested that she gives her his lighter, and that she will light his cigarettes for him from then onward. When she initially said that, he scoffed lol! But after the episode with YQ’s confession, he threw his lighter at her *kyaaa* Both the viewers and Ji Bai got an insight into her childhood and how she got hooked with psychology and reading people. Xuxu and Ji Bai weren’t the only couple setting sail, Yao Meng and Team leader also had their own subtle moments.